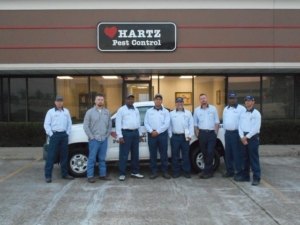 Not so long ago, bed bugs were fairly unfamiliar even to professional exterminators in the Sugarland area. This, however, was not always the case; prior to World War II, bed bugs were common pests. With widespread pesticide use, increasing emphasis on pest control and changing hygiene standards in the decades following the war, problems with bed bugs became extremely rare, but infestations are now on the rise.

Bed bugs can infest any type of dwelling including private residences, hotels, motels, apartment buildings, hospitals, dormitories, nursing homes and others. They can also occur in gathering places such as theaters, dry-cleaning shops, furniture stores and rental facilities, offices, buses and trains. The resurgence of bed bugs is likely due to a number of factors including increasing rates of international travel and immigration as well as changes in the types of pesticides used in modern pest control. Unfortunately, Sugar Land, Texas is becoming a comfortable bed bug feeding ground.

Bed bugs are small, flat, brown parasites that survive by drinking blood. Other bed bug species exist, but they typically infest the dens of wild animals rather than human habitations.

Adults of the species Cimex lectularius are oval-shaped, reddish-brown insects with flat bodies that are approximately 0.19 inches long. Occasionally, people confuse them with ticks or roaches. Bedbugs are able to move very quickly across a variety of surfaces, but they are unable to fly. Females lay one or more eggs per day in secluded areas, and each female lays hundreds of eggs during her lifetime. A typical egg is white to off-white in color and about the size of a piece of dust, so eggs are extremely difficult to detect on the majority of surfaces without magnification.

Immature bed bugs, known as nymphs, can live for months without blood, and adults can survive more than a year with no food. This means that even dwellings that have been unoccupied are not safe from infestations. To make the problem worse, although bed bugs prefer humans, they can feed on the blood of any warm-blooded creature, so if they have access to cats, dogs, rats, mice, birds or other animals, they can survive and breed.

They typically spend their days hiding near sleeping places. Often, these insects gather in small nooks in headboards, mattresses, and box springs. While they do not make nests, they do tend to favor certain hiding spots. These favored hiding places develop dark stains from excrement. Other signs of infestation, in addition to visible bugs and stains, include the presence of eggs and shells and the dry brown coverings shed by molting nymphs. Additionally, streaks of blood on the sheets caused by crushing engorged bed bugs sometimes occur. In the case of a very heavy infestation, there may also be a distinctive odor, but this is difficult to detect. While bed bugs typically prefer to stay near beds, they can crawl several feet to obtain a blood meal and will hide in any protected spot they can find. As an infestation progresses, they usually spread to crevices throughout the home. To solve a bedbug problem, intervention by a pest control expert is required.

Termites Cause Millions of Dollars in Damage to U.S. Homes Each Year, Ask About Our Termite Pest Control Services.