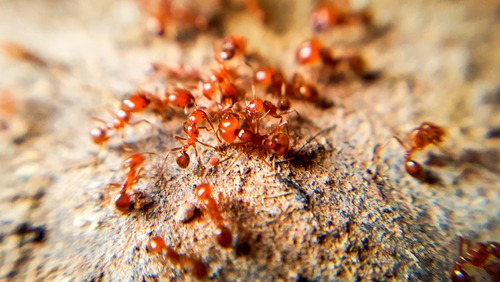 Fire ants live in colonies called mounds. It all begins with the “Nuptial” flight. Winged male fire ants take to the sky and form large masses. The winged females then fly into the swarm and mating occurs. Shortly thereafter, the males die and the fertile new “Queens” begin their search for the perfect nest area. Once found, she discards her now useless wings and begins to make a tunnel. She then lays about a dozen eggs, which hatch in 7 to 10 days.

She will feed and care for them for another week, at which time they will begin the task of building the mound. They will also care and feed their mother “queen” and she will continue to produce more eggs. Once the cycle has progressed, the queen can lay between 800 to 1000 eggs per day. The established mound really begins to grow rapidly from this point.

Dirt and sand taken from building the tunnels are deposited into a mound, sometimes reaching several feet in height. Most ants have one main tunnel leading into their nest. Not so with the fire ant. They can have hundreds of tunnel openings spreading over a very large area. Fire ants even have tunnels leading straight down to the water table. This is one reason why many fire ant mounds are so difficult to destroy.

A mature colony can have between 100,000 to 500,000 fire ants and many queens within the mound. After a rainy period, the worker ants prepare new openings for the winged breeder males, who will then fly out to form another mass.

The females then follow and another nuptial flight occurs. These new queens begin their journey and new colonies are formed. The queen ant can live over 7 years. Nuptial flights occur usually in spring and fall, just after a rainy period. Although fire ants can not survive extreme cold, the mild southern winter has little effect on them. When it gets too cold, they simply move deeper within their nest.

The fire ant is a VERY aggressive ant. It will attack anything, no matter what its size, if it disturbs the mound or their feeding area. The attacks are carried out by many ants, sometimes numbering in the hundreds or more. The classic attack occurs when the fire ant mound is disturbed by accident. The unaware victim won’t even notice the attack until many ants have positioned themselves on the victims skin. Then, all at once the ants begin to bite with their powerful jaws, arching their backs and stabbing the victim with a stinger located in its rear abdomen.

Each ant can sting many times and each sting releases a toxin that is responsible for a burning pain, hence their name “fire ant”. A few stings are really not much of a problem, as not enough toxin is released to really do any real harm. But hundreds of ants, each stinging 8 or 9 times can be painful enough to make any victim look from then on “where thy foot lands”!!!

After being stung, the wound forms a red welt, about twice the size of a normal freckle. The next day, a white pustule (blister) forms. The most common symptom, other than the burning pain when the sting happens, is a mild itch. The itch usually lasts no more than a few days. If the pustule is popped or broken open, an infection and scaring can occur. It is best to just leave it alone and let nature do its work. Most of the time, no real damage is done other than a few new four-letter words learned and a renewed and long lasting respect for these midget sized warriors.

Dealing with fire ants can literally be a pain and the experts at Hartz Pest Control are here to help. If you live in the greater Houston area, give us a call today.

We treat for several types of ants.