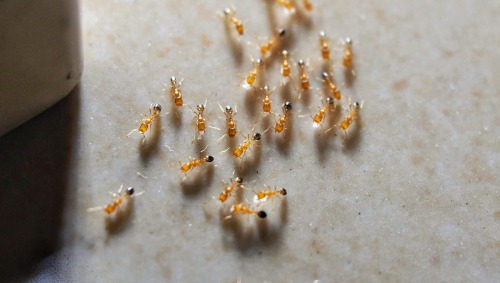 Pharaoh ants are thought to be native to the African region. Their name resulted from the mistaken belief of Linnaeus that this ant was one of the plagues of Egypt in the time of the Pharaohs.

This ant is found throughout the United States. Pharaoh ants have been strongly implicated in the spread of various disease pathogens. Worker ants are about 1/16″ (1.5-2.0 mm) long. Their bodies are usually pale, varying from yellowish to reddish, with the abdomen often darker to blackish. Their antenna are 12-segmented, with a 3-segmented club. The thorax lacks spines, and its profile is unevenly rounded. The pedicel is 2-segmented. Stingers are present. Queens are about 1/8″ (4 mm) long, with or without wings, and slightly darker in color than workers. Males are about 1/16″ (2 mm), winged, black in color, and with straight antenna.

The colonies tend to be large with workers numbering in the thousands to several hundred-thousands. There are usually several hundred reproductive females present in such a colony. Although winged reproductives are produced, there are no flights of swarmers and mating takes place within the nest. New nests can be formed by “budding” with as few as 5 workers, 10 preadults, and one queen migrating from the original colony. Development time (egg to adult) for workers is about 38 days at 80 degrees F. Workers live about 9-10 weeks, with only up to 10% out foraging at any given time. Queens live about 4-12 months, and males die about 3-5 weeks after mating.

These ants are of particular importance in hospitals where they will enter wounds, enter in-use IV bottles, seek moisture out of sleeping infants, etc. More than a dozen pathogenic bacteria have been found on Pharaoh ants collected in hospitals.

Pharaoh ants nest in warm (80-86 degrees F/27-30 degrees C), humid areas near sources of food and/or water. Nests are usually located in inaccessible areas such as wall voids, behind baseboards, in furniture, under floors and between lines. The workers range widely from the nest in search of food and water, and establish trails to food and water sources. They commonly use electrical and telephone wires as a highway system to travel through walls and between floors. Pharaoh ants are common problems in commercial food handling establishments such as hotels, grocery stores, hospitals, and in apartment complexes.

Outside, these ants seem to be of little importance today. In the temperate/northern areas of the United States, they usually cannot survive outdoors year round.

They have a wide preference in food, ranging from syrups to fruits, pies, meats, and dead insects. They use carbohydrates primarily for maintenance whereas, protein is primarily required for larval development and egg production by the queens.

To learn more about treating pharaoh ants in your home or office space, contact Hartz Pest Control today. Our expert exterminators in Houston will help eliminate your ant problem, including the fire ant.