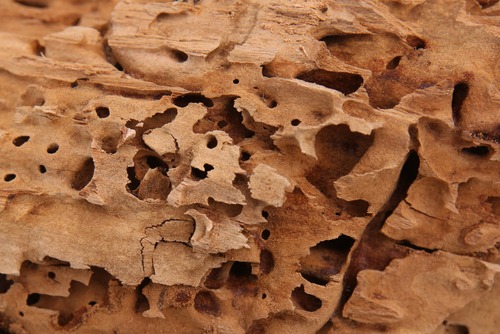 Carpenter ants get their common name from their habit of hollowing out pieces of wood for nesting purposes, often resulting in structural damage. Carpenter ants are found throughout the United States.

Although carpenter ants do not sting, their bites can be quite painful, especially when they inject formic acid into the wound.

The only external indication of infestation other than the presence of workers and/or swarmers is the appearance of small openings or windows on the surface of the wood. Through these, the workers expel debris consisting of sawdust-like shavings or fragments of insulation and insect body parts. The accumulation of such debris below such holes is a good indication of an infestation.

Inside, the hollowed-out galleries follow the softer spring wood with numerous connections through the harder, dark summer wood. The gallery walls are smooth, with a sand-papered appearance. The active galleries are kept clean of debris.

Fire ants prefer to attack wood softened by fungus and are often associated with moisture problems.

Black Carpenter ant colonies are of moderate size, usually containing over 3,000 workers (up to 10-15,000 including satellite nests) when maturity is reached in about 3 to 6 years. The typical western carpenter ant mature colony contains about 10-20,000 workers, with large colonies having up to 100,000 workers.

Developmental time (egg to adult) for workers takes at least 60 days. Workers are polymorphic, with majors, minors and intermediates present. There is usually only one functional, wingless queen per colony. Swarmers are not produced until the colony is more than 2 years old. Swarmers appear from May until August in the east and from February through June in the west.

Most carpenter ant species establish their first nest in decayed wood and later expand or enlarge this into sound wood. Inside, nests are located in wood (preferably softened by fungus rot), in insulation or in wall voids. Workers are a nuisance when out searching for food but are destructive to timbers used for nesting activities. Outside, nests are typically located in rotting fence posts, stumps, old firewood, dead portions of standing trees, and under stones or fallen logs.

The presence of a carpenter ant nest is sometimes indicated by a rustling sound coming from wall voids or from wood where the colony is located. Otherwise, the emergence of swarmers indoors may be the first indication of an indoor colony.

Carpenter ants feed primarily on insect honeydew, plant and fruit juices, insects, and other anthropods. Inside they will also feed on sweets, eggs, meats, cakes, and grease.

The workers forage for distances of up to 300 feet (91.4m) from the nest. They typically enter buildings around door and window frames, eaves, plumbing and utility lines, and shrub and tree branches in contact with the building. Although some workers are active during the day, most activity is from dusk until dawn, with peak activity between 10 pm and 2 am. The trail between the parent and satellite nest is usually about 1/4-13/16″ (6-20 MM) wide and is kept clear of vegetation and debris. The trail usually follows contours but typically will cut across lawns.

If you’ve got carpenter ants, contact the experts at Hartz Pest Control today. We have nearly 30 years of experience to help get your ant problem under control effectively and efficiently.